If you've ever seen "The Wizard of Oz," then you've seen the poppy plant -- the source of a type of drug called opiates. When Dorothy lies down in a field of poppies, she falls into a deep sleep. No wonder the Latin name of this plant -- Papaver somniferum -- means "the poppy that makes you sleepy."

Opiates are made from opium, a white liquid in the poppy plant. They're also referred to as narcotics. Maybe you've heard of drugs called heroin, morphine or codeine. These are examples of opiates.

Opiates can produce a quick, intense feeling of pleasure followed by a sense of well-being and a calm drowsiness. But they can also become an addiction. If someone uses opiates again and again, his or her brain is likely to become dependent on them. 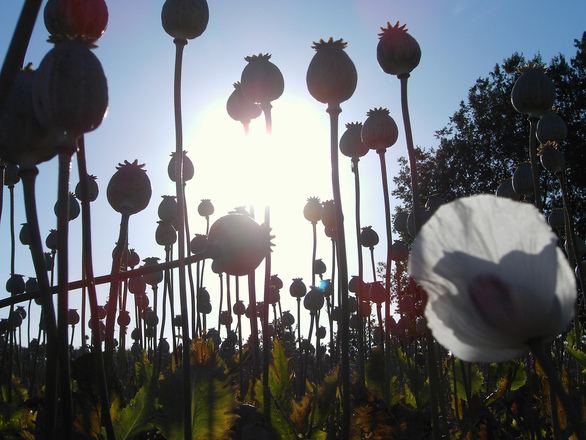 What happens to make a person and his or her brain become addicted to an opiate? Long term opiate use changes the way nerve cells in the brain work. These cells grow so used to having the opiate around that they actually need it to work normally.

If opiates are taken away from dependent nerve cells, many cells become overactive. Eventually, these cells will work normally again, but in the meantime, they cause a wide range of symptoms in the brain and body. These are known as withdrawal symptoms. Have you ever had the flu? You probably experienced symptoms such as aching, fever, sweating, shaking or chills. These are similar to withdrawal symptoms, but withdrawal symptoms are much worse. Yuck!

How Nerve Cells Respond to Opiates

Within the limbic system, brainstem and spinal cord, there are places on certain nerve cells that recognize opiates. When stimulated by opiates, these sites -- called opiate receptors -- trigger responses in the brain and body.

Scientists have identified three types of opiate receptors: delta, mu and kappa (named after letters in the Greek alphabet: Delta, Mu, Kappa). Each of these receptors is involved in different brain functions. For example, mu is responsible for the pain-relieving effects of the drug morphine.

Opiates act on many places in the brain and nervous system.

B. The brainstem controls things your body does automatically, like breathing or coughinOpiates can act on the brainstem to stop coughing or slow breathing.

Did you know that some opiates can have important medical uses? They're powerful pain killers, and doctors sometimes prescribe them to control severe diarrhea. If you look on a cough medicine label, you might find that codeine is one of the ingredients.

Your brain produces its own versions of opiates, called endogenous opioids. These chemicals act just like opiates, binding to opiate receptors.

Endogenous opioids are your body's way of controlling pain. If you've ever felt pleasantly relaxed after exercising a lot, that feeling was probably caused by the release of this natural chemical in your brain.

If you are looking for treatment programs addressing Opiate addiction,  The Substance Abuse and Mental Health Services Administration (SAMHSA) can help you find centers.

"Mind Over Matter" is produced by the National Institute on Drug Abuse, National Institutes of Health. These materials are in the public domain and may be reproduced without permission. Citation of the source is appreciated. NIH Publication No. 97-3856.