A Black woman on the Supreme Court? Check your blind spots. 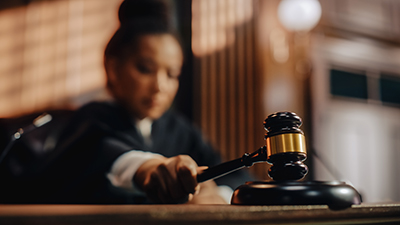 When I think of people in prominent positions of authority or success, I default to white. Most of us do.

I don’t mean to. I’m a strong believer in the importance of diversity and representation, but I am also a product of a racialized media culture where white is the baseline. I consciously push back against this, but my subconscious is a bit of a white supremacist.

I thought about this when President Joe Biden announced he would follow through on his campaign promise to nominate a Black woman to the U.S. Supreme Court. Not only was there predictable backlash from some GOP officials and right-wing talking heads, but average Americans seemed to miss the point.

More on that later, though. First, let me tell you about my own blind spots.

About a decade ago, I was disgusted by some fans of the trilogy of young adult novels “The Hunger Games.” They were upset that the character of Rue — who saves heroine Katniss Everdeen’s life and inspires her eventual victory — was being played by a young Black actress in the film adaptation.

“Awkward moment when Rue is some black girl and not the little blonde innocent girl you picture,” read one clueless tweet.

Problem was that while it was easy to abhor the explicit racism, I did not remember that Rue was Black. If I was honest with myself, in the years after I read the first book, she had become as white as movie Katniss, who as portrayed by actress Jennifer Lawrence, is herself far from the olive-skinned version of the novels.

More recently, I was talking on the phone to a construction worker from Honduras who was struggling during the early days of pandemic lockdowns. We had a great conversation, and he later shared images of him and his family. When I saw the photos, I shook my head at my surprise.

He was Afro-Latino, and I was a fool.

These are two examples I think about often when the subject of representation comes up. I get that it’s very difficult for many white people to understand, let alone care, why having someone who looks like you in media (movies, TV, etc.) or in positions of power is critical. After all, that’s all they’ve ever known.

But at a fundamental level, it’s also hard for people of color to see themselves there, because that’s all many of us have ever known, too. Picture a butcher, baker or lawmaker, and it’s probably a white guy.

That’s at least how I’m interpreting the results of a recent ABC News/Ipsos poll that found that 76% of Americans want Biden to consider “all possible nominees” instead of sticking to his promise to nominate a Black woman to the high court.

That’s way too many people who don’t get the significance of having the court look like America — of having justices with a different perspective have final say on the law of the land.

I’m sure some respondents take Biden at his word when he said he would nominate someone “with extraordinary qualifications, character, experience and integrity,” but they have trouble believing that person could ever be someone of color. I mean, how else do you explain that since the high court’s creation, 108 out of 115 justices have been white men?

Further breakdown of the results is also discouraging. Only 28% of nonwhite respondents, according to the ABC News/Ipsos poll, said that Biden should focus exclusively on a Black woman as a potential justice. Democrats are more supportive of a Black nominee than Americans as a whole, but 54% prefer the president cast a wide net.

Some may say the results are a question of fairness. That most people want to ensure that everyone who has a shot gets a shot. But, in all fairness, that is not true. Dig deeper, and I bet that list of “all possible nominees” includes a very limited definition of the word “possible.”

This is a vicious cycle that applies across industries. It’s a common refrain that there aren’t enough “qualified” minority candidates for a position, especially the higher up the ladder you go, but it’s a self-fulfilling tragedy.

The U.S. cannot live up to its full potential — which hinges on the strength of its diversity — unless we drop the blinders and understand the value of every American knowing they have a place in this country.

Until then, we all lose by default.