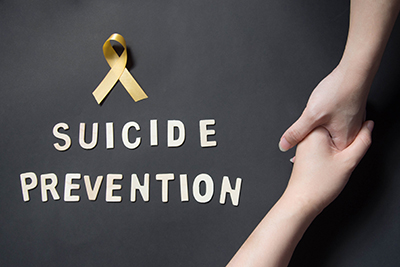 The Mental Health Project is a Seattle Times initiative focused on covering mental and behavioral health issues. It is funded by Ballmer Group, a national organization focused on economic mobility for children and families. The Seattle Times maintains editorial control over work produced by this team.

Editor’s note: This story focuses on suicide, self-harm and other topics related to psychiatric distress. If you or a loved one is in crisis, resources are available here.

Dr. Rebecca Marshall became increasingly concerned as she did rounds in the ER at a children’s hospital in Portland.

More young children than usual — and girls in particular — were being brought to the hospital after swallowing medications to attempt suicide. Children of jarringly young ages, some just 9 or 10, were seeking out pills in the family medicine cabinet. As Marshall tried to come to grips with what she was witnessing, she’d make a point to ask: Why did you think about ending your life?

Warning signs of suicide
If you are experiencing suicidal thoughts or have concerns about someone else who may be, call the National Suicide Prevention Lifeline at 1-800-273-TALK (8255). You will be routed to a local crisis center where professionals can talk you through a risk assessment and provide resources in your community. The more of the signs below that a person shows, the greater the risk of suicide.
• Talking about wanting to die
• Looking for a way to kill oneself
• Talking about feeling hopeless or having no purpose
• Talking about feeling trapped or in unbearable pain
• Talking about being a burden to others
• Increasing the use of alcohol or drugs
• Acting anxious, agitated or recklessly
• Sleeping too little or too much
• Withdrawing or feeling isolated
• Showing rage or talking about seeking revenge
• Displaying extreme mood swings

There was no single reason, and it’s difficult to generalize about youth suicide because there’s only limited data. Sometimes children she spoke with said they didn’t know how they got the idea. But a worrisome attitude shift seemed to underlie much of what she saw.

“There’s kind of this idea that’s out there now, which is if you get really overwhelmed, if something bad happens, an option is trying to kill yourself,” she said, rather than messaging that, “Bad things happen to all of us, we all have upset feelings sometimes, and we all can figure out ways to cope with those feelings.”

Now, a pair of new national research studies and Washington data help confirm what Marshall and many others are seeing in hospitals across the Pacific Northwest. Use of medications or other poisons to attempt suicide or self-harm are rising among youths as young as 9, and the largest increases are among those ages 10-12. The number of kids in that age group who ingested some type of poisonous medication or other substance to attempt suicide increased by 4.5 times from 2000 to 2020, according to one of the national studies, published in JAMA Pediatrics in March, compared to a 2.4-fold increase among older adolescents.

“It was not surprising to me at all,” said Marshall, who co-led the study and is a psychiatrist and associate professor of child and adolescent psychiatry at Oregon Health & Science University. “And I don’t think it was surprising to any of my colleagues who work in children’s mental health, because it’s what we’re all seeing.” 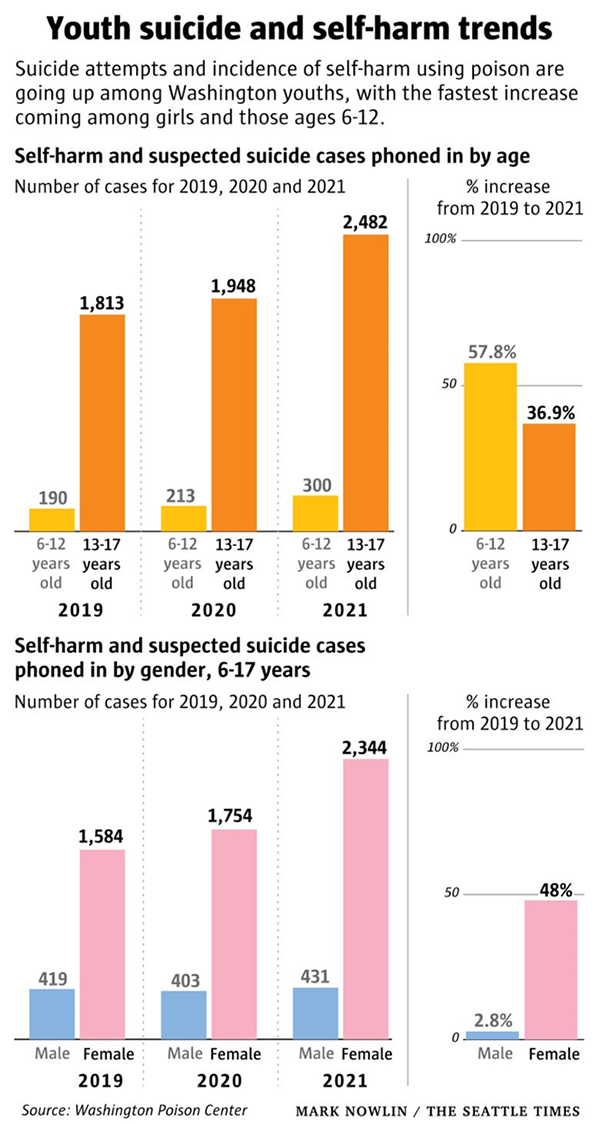 But the emerging data may serve as an eye-opener to families of young children — and should spur caregivers, teachers and health care professionals to be more vigilant about monitoring children’s moods and behaviors, said Dr. Christopher Holstege, a medical toxicologist and professor of emergency medicine and pediatrics at the University of Virginia.

“These very young ages are pretty stunning to these parents,” said Holstege, who led a separate study that aligns with the findings published in JAMA Pediatrics. Parents are often more primed to keep medications out of reach of a toddler, or locked away from a moody teenager. But “if you have a 10-year-old, parents can’t even comprehend that age group would even be thinking that, they would try to take their life.”

The data also offers an urgent warning to caregivers, Marshall and Holstege said: Lock up all medications — prescriptions and over-the-counter drugs — and if you suspect your child ingested pills, don’t hesitate to contact poison control.

Keep kids safe
Lock up all medications, including prescription and over-the-counter drugs.

Sharp increase
The two new studies pulled data from the National Poison Data System, a huge repository that allows researchers to look for trends in who swallowed substances and when. Though they were on opposite coasts, Marshall and Holstege were witnessing the same phenomenon — and wanted to understand if what they were seeing in their hospitals was reflected on a national scale.
Suicide attempts involving substances rose across the board in 9- to 18-year-olds, but the data suggests the youth mental health crisis is worsening, and skewing into increasingly younger age groups. It’s rare for children and teenagers to die by overdose: Of the more than 1.2 million ingestion cases Marshall and her colleagues studied over 20 years, 1,005 resulted in death. But almost 29% of cases had a moderate or major health effect on the child or teenager.

Lack of access to mental health services may be partially to blame. Child psychiatrists’ caseloads are topped out, ERs are overflowing with pediatric patients, and children’s “inpatient units are full, always,” Marshall said. In Washington and elsewhere, securing a mental health evaluation or therapy appointment might come with a month-long wait.

In general, children are sensitive to what’s happening in their environment, and a confluence of events in recent memory — the pandemic, the opioid crisis, political unrest, climate change — may make children feel less secure. Ten- to 12-year-olds may be less likely than older peers to have a grasp on the consequences of their actions, Marshall said, and the combination of impulsivity, societal instability and easy access to over-the-counter medications may contribute to the rise in concerning behaviors.

“They may not understand what death is, or what it is to die,” she said. “They get caught up in an emotion or in an experience and they do things without thinking them through very carefully.”

Washington data fits with the new national research. The Washington Poison Center, which has tracked poisonings tied to suicides and suicide attempts for years, witnessed a sharp increase in calls about youths beginning in 2014, said Meghan King, public health education and communications specialist at the center. And while the number of cases dropped when schools closed in spring 2020, they’ve since increased at a steeper rate than before the pandemic.

Because the center only captures cases that are phoned in, the data likely underestimates the true number of ingestions.

Staying safe
Girls are at particular risk: In general, many more girls than boys attempt suicide using nonlethal means, such as poisons, but over the recent three-year period, the number of calls the Washington center received about girls increased by 48%. Calls about boys increased just 3%. 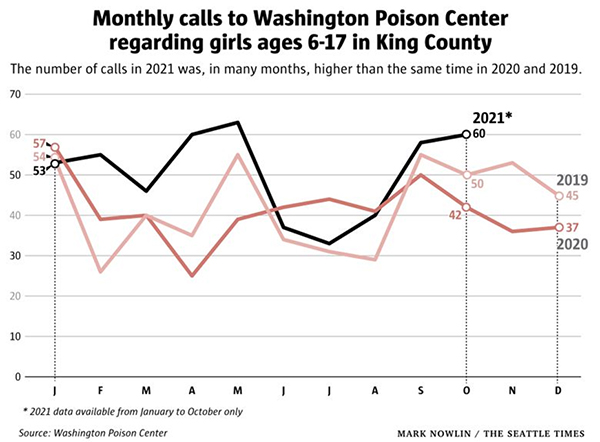 The pandemic has been particularly stressful for girls, who tend to use their social networks for support more than boys during elementary and middle school, said Jim Mazza, a psychologist and school psychology professor at the University of Washington. Bonding with friends at school can help protect kids against mental health concerns — but socializing largely went away when schools closed.

Parents and caregivers should look for warning signs of depression or suicidal thoughts, Mazza said, such as withdrawing from social activities, spending time alone in their bedroom or glued to their phone. They should also be prepared to ask their children tough questions, he said, like whether they’ve thought about harming or killing themselves.

Storing medications in a toolbox with a padlock is a simple way to keep kids safe, Marshall said. Families should monitor what their kids are looking at on social media, she added, and ask them about what’s going on in their lives and in their friend groups. Finding ways to help them engage in social activities and limit screen time can also help, she said.

And families should look out for signs of ingestion, such as vomiting, complaining of abdominal pain, acting apathetic or depressed, or avoiding conversation, said Holstege, from the University of Virginia. Getting timely care is “exceedingly important,” he said, and families should quickly call their local poison center for advice on next steps — or bring their child to an ER if they need urgent attention.

“It’s hard for some parents to, one, believe their child would overdose and, two, it’s significant enough to seek help,” he said. “They want to try to take care of it themselves and may not think it’s a big deal because [their child might] look fine right now. But then a day or two later they’re not looking fine. And that’s when we’re more limited in how we can help them.”

We’d like to hear from you.
The Mental Health Project team is listening. We’d like to know what questions you have about mental health and which stories you’d suggest we cover. Get in touch with us at mentalhealth@seattletimes.com.

Hannah Furfaro: hfurfaro@seattletimes.com; on Twitter: @HannahFurfaro.
Hannah Furfaro is a mental health reporter at The Seattle Times. She has a master's degree in science and health journalism from Columbia University, and wrote about neuroscience and psychiatry before joining The Times. She previously published stories in Science, The Wall Street Journal and The Atlantic, among other places.