The Black Lives Matter marches in towns like Bremerton, Bainbridge Island, Port Orchard, Poulsbo and Silverdale might seem small fry compared to the massive protests that have ignited in cities like Seattle. But they’re a big deal out here in Kitsap County, where Black residents make up only about 3% of the population and President Donald Trump pulled nearly 40% of the vote in 2016.

It’s no coincidence that this movement is taking hold in rural and suburban areas during the time of coronavirus, when people accustomed to a heaping share of certainty — that is, privilege — are feeling uncharacteristically lost at sea.

This monumental pause has not only disrupted our routines and given us ample time to think, it’s exposed the old lie that change must come slowly — if it comes at all. As Kitsap County adjusts to Phase 2, it feels less like a return to normal and more like taking tentative steps into an entirely new kind of life. Why not make it a better one?

“This is a different shade of protest,” said Tracy Flood, president of the NAACP unit in Bremerton. “You’re seeing the participation of all cultures. It’s not just Black people marching for Black lives.”

What has woken the suburbs from their slumber? It wasn’t just George Floyd’s awful and needless death under the knee of a Minneapolis police officer. It was the accumulation of incontrovertible evidence that bias, inequality and racism pollute every aspect of our society — from the justice system to medical care, economic opportunity and education.

It’s about damn time the white majority faces up to the cold fact: Racism and unequal treatment in America is a sickness. It’s a life-threatening, festering wound. But it will take more than marching. It will take humility, persistence and concerted action to bring about meaningful change.

White rural and suburban women, in particular, have been flaky allies in the ongoing struggle against systemic racism. In fact, as a group, we’ve been shamefully inconsistent, dipping in and out whenever we please.

After the 2016 election, we vowed to do better, and there’s some evidence that we’re getting there, if slowly. Robin DiAngelo’s book “White Fragility” was out of stock on Amazon when I checked Friday. That’s got to mean something. In my own life, I see a lot of white women trying to be more educated, more consistently mindful of their privilege. More confident in their ability to contribute and committed to taking up the work.

That means putting our power to good use. For one thing, white women have to start calling B.S. when we’re used as an excuse to perpetuate injustice. Like when Minnesota State Senate Majority Leader Paul Gazekla, R-East Gull Lake, tried to shame state and city leaders into apologizing to “the moms out in the suburbs scared to death about what’s happening all around them and seeing the glowing fire in Minneapolis-St. Paul.”

Gazekla and his sort can save their sympathy, as suburban moms of every race colorfully advised him on Twitter. #IAmASuburbanMom

This old trope that we fragile flowers are somehow protected by racial bias, discrimination and violence has been used to justify all sorts of atrocities since the time of slavery. It’s got to go.

Next, it means getting beyond good intentions and stepping up to support Black leaders who are demanding systemic change — like establishing police citizen review boards with subpoena powers, which Flood is advocating, and other local, state and federal reforms.
White women don’t need to come up with the answers to be part of the solution — we need to listen to the Black, brown and indigenous leaders — like Flood and the Kitsap Equity, Race, And Community Engagement Coalition — who are already hard at work.

As Flood says, “If we get the right policies in place, it’s going to make everything better.” For everybody.

We have a responsibility to see this through. 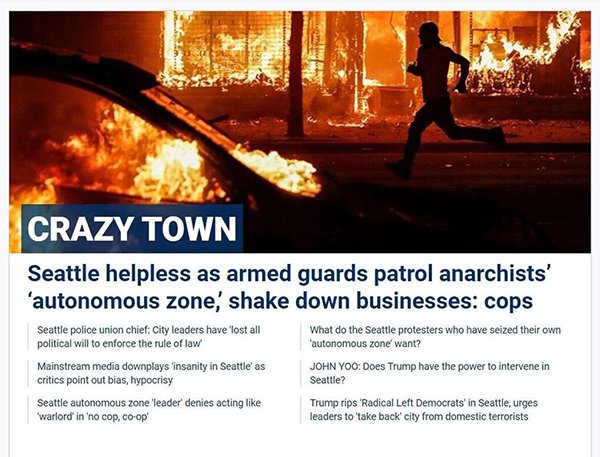 If Seattle police budget is cut in half...